A Day at the Spa 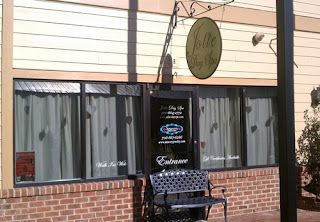 Jolie Day Spa, a perfect place for a day of beauty, is one of the newest businesses on the Dahlonega town square.

Out-of-towners have discovered this little hidden haven of relaxation, but it's also a place where you might just run in to a local or two.

The place was abuzz the day that D dropped in for a hot stone massage. And wow, what a way to spend an afternoon. For an extra special day, we recommend lunch at one of Dahlonega's great restaurants and then a visit to Jolie Day Spa.

Please put this spa on your Must-Visit list. And when you're there. Ask for Clare!

Cruising AFTER the Concordia Shipwreck

Just a few weeks after the horrific, unbelievably frightening Costa Concordia shipwreck, D&B boarded a mega cruise ship for a five day cruise on Royal Caribbean's Liberty of the Sea.

Unlike the Costa cruise lines, Royal Caribbean ships gather passengers BEFORE a ship sails for the life boat drill.

At our drill, we learned how to put on a life jacket even though we didn't have our life jackets with us. (Passengers are instructed to leave the jackets in their staterooms.) We were told what to do if we had to abandon the ship (Screaming wildly and fighting to get on a life boat were not options we were given.)

What was most disappointing was that we seemed to be the only ones around us who took the drill seriously. We listened and watched but the people next to us weren't paying attention at all. They were too busy giggling, taking pictures and downing beers and umbrella drinks to hear any instructions.

Of course, had the ship had any problems, those 'who were too busy to the drill' would probably have been the ones in a panic. We, on the other hand, would be calm and collected...or at least we would know how to put on a life jacket.

The morale of this story is that life boat drills should be taken seriously...what you learn there could save your life.
Posted by Unknown at 9:00 AM 2 comments:

Alice, a fluffy brown bunny, was kidnapped right from his (yes his...Alice is a boy) home in a classroom at Lumpkin Middle School. Alice, the beloved pet bunny of LMS teacher Suzanne Davis, was snatched during a break-in at the school.

While the break-in was bad enough - the vandals spray painted a boys' bathroom - the bunny napping was un-nerving. Not only did the kidnappers take Alice, but they also grabbed his food and water bottle, too.

Alice, who is house-broken, spends his day watching the kids in Ms. Davis' science classes. So, you can imagine who upset the six graders were over their missing bunny.

The Lumpkin County Sheriff's deputies were called in to investigate Alice's disappearance (oh and the spray painting, too.) The two deputies, who admitted they had never worked on a bunny napping case, used video surveillance footage to identify and track the culprit down.

When the sheriff's department "raided" the bunny napper's home, Alice was found alive and well, hidden in a backyard shed.

The story of Alice, the stolen bunny, made the front page of the local Dahlonega newspaper. Seeing two smiling deputies and a cuddly brown bunny made a good news story. In today's world, we need more happy bunny stories.
Posted by Unknown at 10:30 AM No comments:

The Community & Southern Bank announced that it's closing the large branch office, located off the square in downtown Dawsonville, Ga. The large two story building, with adjacent community center, dominates the corner of the Food Lion Shopping Center.

The Dawsonville branch is just one of many (including one in Winder) that the C&S Bank will close on or before April 27, 2012.

We got word of the closure in a nice friendly, "Dear Valued Customer" letter, telling us that we can use the nearby Dawsonville 400 Branch "located less than eight miles away." Guess that would be okay if the soon-to-close branch wasn't already NINE miles from my house. Nothing says convenient like driving 17 'short' miles to the bank.
Posted by Unknown at 8:00 AM No comments:

"You Have Cancer" - Not What You Want to Hear

Until you've heard these chilling three words, "You have cancer," you can never know firsthand the impact cancer has.

Once those words are out of your doctor's mouth, you're flooded with emotions and questions - "Am I going to die? Just how bad is it? What's going to happen to my family? What are we going to do?"

As the cancer news sinks in, the first thing you do is seek doctors' opinions on treatment options. That was the case in May 2009 when D heard that she had a tumor on her right kidney. Three doctors said, "Take your kidney out." But one doctor had a different opinion. "There's something new you can try...a relatively new technology that will remove your tumor but let you keep your kidney."

Since most of D's working career has been in technology and life with just one kidney didn't sound that appealing. Instead of the scalpel and removing a kidney, D chose ablation, a technology option that uses needle probes to either freeze or burn the tumor, leaving just little pin pricks in the back. No surgical scars. No long hospital stays. No long recovery. 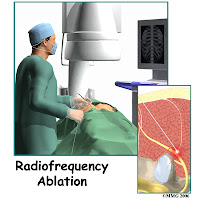 The bad news, in D's case, is that the first procedure - cryoablation (freezing the tumor) left a small piece of tumor so a second procedure was needed. This time doctors tried radiofrequency ablation that burned the tumor.

Unfortunately, even after the second ablation, an itty bitty spot was still there. The doctors watched that spot closely to see if it changed or grew...and then after a CT scan in 2011, the doctors saw the tumor growing.

Again, D was faced with a decision of gigantic proportions and again two doctors said "take that kidney out." But Dr. James York of Gwinnett Medical Center, D's original radiologist oncologist wasn't ready to give up. "You've fought so hard to keep the kidney," he said. "There's one more procedure...one that wasn't even approved in the U.S. a few months ago...that could work."

The downside - only one doctor in Atlanta in February 2011 was performing this new 'miracle procedure.' 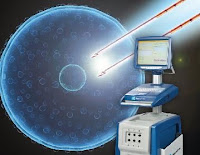 Enter Dr. Henry Krebs, radiologist-oncologist at St. Joseph's. Dr. Krebs is one of the few doctors in the U.S. who performs the revolutionary IRE Nanoknife procedure. And Dr. Krebs and his Nanoknife worked a miracle for D. Ten months and four CT scans later - each scan shows that the kidney tumor is dead, dead, dead. And D's right  kidney is alive and functioning at 85%.

D. set a medical record with her NanoKnife procedure - the first patient in the U.S. to have had all three CT guided treatments -  radiofrequency ablation, cyroablation and the IRE NanoKnife.

Now after three worry-filled years, thanks to technology and the lovingest support system of Team Fran and dear friends, D is cancer free and I celebrate my one year anniversary of being cancer free.

The morale of our journey - While "You have cancer" are frightening words to hear, don't settle for the first treatment option a doctor presents (or the even second or the third.) Do your own research and, if need be, trust in technology.
Posted by Unknown at 10:01 AM 3 comments:

Shopping for Your Dog

Now that we think back, the shopping scene should have been embarrassing. Here we were, two tourists, in a small gift shop, checking out the store’s display of stuffed animals.


Shopping along with us were two women tourists, both in their early 20’s.  All four of us were picking up one fluffy animal after another, trying to find the perfect toy. After squeezing each to see if any squeaked or rattled, B& I selected the cutest pink fuzzy puppy that barked every time we touched it.


One of the two women shoppers chose the same one too. “My niece is going to love this,” said the woman. “And what little girl is going to get your pink puppy,” she asked us. Without hesitation and not embarrassed at all, we said, “Our dog.”


Shopping for your dog has now become quite acceptable in our society today. In fact, it’s common place for pet parents to bring home vacation souvenirs to their pets. We are no exception, always bringing our Little Nessie a ‘We missed you” present when we return home from a long trip.


Marketers are targeting pet owners. (Factoid: 63% of dog owners and 58% of cat owners give their pets presents at Christmas.)
More and more gift shops and tourist-focused stores are carrying pet clothing, dog toys, and other specialty pet gifts. After all, you can’t go on a trip without bringing home a gift for your ‘little one.’
Posted by Unknown at 9:00 AM No comments:

Look what we found at the General Store - Moonshine 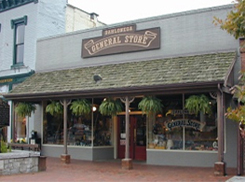 Smack in the middle of the Dahlonega town square is the Dahlonega General Store. Here you can purchase a cup of coffee for a nickel, sample fresh roasted peanuts, and shop for everything from Confederate money to Vidalia barbecue sauce.

On a recent trip to the General Store, we found moonshine in a Mason jar. Instead of the illegal white lightening, homemade whiskey, the jar was filled with Moonshine jelly. The clear, almost translucent, jelly - while it looked like Moonshine in a bottle – was actually a type of apple jelly without any alcohol.
Moonshine jelly – what a perfect gift from North Georgia, especially when paired with a couple of jars of homemade pickles and Georgia Peach jam.
Don’t just take our word for it. Come to Dahlonega’s General Store to buy your own jar of Moonshine jelly or buy a jar online. Better yet, here's a recipe if you want make your own. This recipe uses white wine (not Moonshine) for an EXTRA kick.
Posted by Unknown at 10:37 AM No comments: