Instead of standing in line this election day, we voted early. And while casting our votes, Dahlonega and Beyond learned a thing or two or in this case, six: 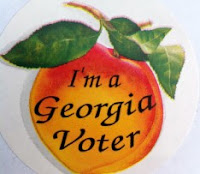 Voting is one of the best parts of being an American citizen. It's a citizen's duty and a privilege. Plus, in Georgia, you also get a fancy orange I'm a Georgia Voter sticker. One thing is for sure, we'll be seeing a lot more of those stickers in coming days.
Posted by Unknown at 8:30 AM 1 comment:

Liquor Question on the Ballot 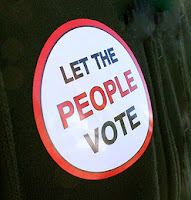 The decision to sell wine and beer on Sunday in Lumpkin County is now in the hands of the voters. After months of arguments, editorials, speeches, and signs, the County Commission (by one vote) agreed to put the Sunday liquor sales referendum on the Nov. 6 ballot.

The controversy surrounding Sunday sales centered on the people having a right to vote on an issue that affects the entire county. The argument ultimately doomed the political career of one Lumpkin's commissioner. Because of his stubbornness and refusal to allow the referendum to be put up to public vote, the people voted him out of office in August.

Emotions are still high regarding Sunday sales, on both sides of the issue. Our stance since the referendum first became an issue has been that the people have the right to vote...be it yes or no. But no matter which side of the debate you are on, please vote. Once the votes are tallied, the commissioners will know how their constituents feel on the issue...and the people will have spoken.
Posted by Unknown at 8:30 AM No comments:

A Bernard by Any Other Name

When the announcement came in January that North Georgia College and State University and Gainesville State College were combining, faculty, students and grads all were concerned about what would happen to school programs, curriculum, and staffing.

Few people, at that time, thought about the fate of the Fighting Geese and the Saint Bernard. (The aggressive birds and the reverent canine are the mascots for Gainesville College and NGCSU, respectively.)

The joining of the two schools meant either one of the mascots would be killed off or, worse yet, both would have to disappear to make way for a new mascot for the soon-to-be University of North Georgia?

What should the newly formed university do? Keep the Saints or the Geese? Or perhaps combine the two, i.e. the Fighting Bernards, the Saintly Geese, the Fighting Saints, or maybe even Bernie the Goose.

A Name that Mascot committee pondered the dilemma and came up with three possible mascot contenders: Golden Eagles, Nighthawks and Warriors.

Then, the students, faculty, staff and others were asked to vote for one of the three. Votes are in and tallied...and  the winner is the Nighthawks.

The reviews for the new mascot are mixed."Not tough enough for me...nighthawks just fly around eating insects," said one student in a Gainesville Times interview. Another declared, "I LOVE IT....NOBODY else has this mascot anywhere near us!"

To be honest, we think we know why no other schools in the area are Nighthawks. It's a weird selection. Maybe the Fighting Saints would have been better. Oh well, the election is over. Can't wait to see the Nighthawk mascot parading around at a UNG basketball game!

Walmart. That one word can conjure up considerable emotions. Some people LOVE Walmart. Others HATE the super chain.

For example, take the Walmart graffiti on an abandoned building outside of Dahlonega. An obviously disgruntled Walmart shopper has declared his disdain for the mega super chain, with bright blue anti-Walmart art work urging a store boycott

Initially, D&B were Walmart haters, although we never reverted to graffiti to express our opinions. Both of us are from small towns in Louisiana where Walmart came in and, within, a couple of years, ran the homegrown retailers out of business.

For years, we didn't shop Walmart, going to Kmart at first and then to Target or the major grocery chains instead.

Then, we moved to Dahlonega. Here Walmart is THE place to shop. It's where we go for groceries, pens and  paper, cosmetics, dog food, detergent...and the list goes on. While we may not have converted completely to Walmart Lovers, we do shop there. In fact, now when a family member asks, "Where did you get that," the answer most of the time is "Walmart."

And just in case anyone asks, when it comes to us, the local store has always honored the Walmart policies. But obviously, for one local resident, that hasn't been the case.

Thank you, Sandra Deal. Thank you for coming to Dahlonega to talk about your love of reading and your and Governor Nathan Deal's passion for education.

Thank you for helping us send a strong message to the 'movers and shakers' of Lumpkin county and for pointing out that when a business can't find properly trained employees, they go elsewhere. Those words resonated throughout the audience.

Unemployment in Lumpkin, hovering around 9%, is higher than the state and the national averages. Lumpkin wants to bring new business to the county and expand the businesses we have, but we can't do that until we improve the education skills of our workforce.

Over 3,000 people in Lumpkin over 25 years old can not read. That's a lot of people, especially when you consider that illiteracy costs the U.S. approximately $240 billion a year in lost productivity, law enforcement, and unrealized tax revenues. (Source Washington County Illiteracy Council.)

"Education is the best gift we can give our children and the people of our state," said Mrs. Deal. And she is right. Now we must focus on educating our children and helping those who missed out, those who need to learn to read, who need a GED, and who can improve their quality of life.

Again, thank you Sandra Deal. Because you took time to speak to the Adult Learning in Lumpkin (ALL) Summit on Oct. 10, people are talking about illiteracy in Lumpkin and how it impacts our economy.

Literacy (or the lack of) is a problem in Lumpkin. That's what we learned at the Adult Learning in Lumpkin (ALL) Summit here in Dahlonega on Oct. 10.

One of the highlights of the event (besides a keynote address from Georgia's First Lady Sandra Deal) was a panel of leaders talking about literacy and how we (the county and state) are tackling the issue. Here's what we learned from the panelists: 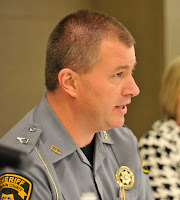 Lumpkin County Sheriff Stacy Jarrard - Not being able to read is a problem with inmates. The jail had to video tape the reading of the Do and Don't jail handbook because so many inmates couldn't read it. The Sheriff's department strongly supports the GED program, offering GED classes for jail inmates."We have had 50 to 60 graduates from our GED program." Sheriff Jarrard sees that education is key to lowering the crime rate, and he needs volunteers for the GED program. 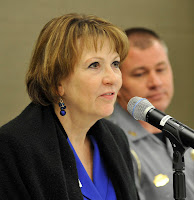 Dr. Bonita Jacobs, President of NGCSU - With the upcoming consolidation (NGCSU and Gainesville College), the soon-to-be University of North Georgia can create multiple paths for people to work for advanced degrees. "I long for the day," she emphasized, "when we are bringing in more businesses so that our graduates who want to stay here can." 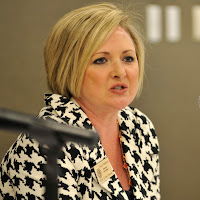 Tricia Pridemore, Executive Director, Governor's Office of Workforce Development - "The most frequently asked question when businesses look to Georgia," said Ms. Pridemore, "is 'Can the work force do the job?'" Businesses want to know what it will take to train people for their jobs, she added. (Oh by the way, did you know that Georgia is the 33rd largest economy in the world?) 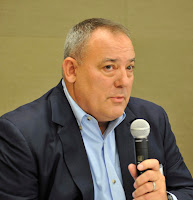 Roger Yonts, HR Director, Koyo Bearings - According to Yonts, when the large Lumpkin employer Koyo hires, they first look at the applicants' education qualifications because "Education is critical...everything our employees do is based on their being able to read." Yonts also confirmed what we already new job competition is fierce in Lumpkin. At a recent job fair, 400 applicants applied for 45 openings at the Dahlonega Koyo plant. 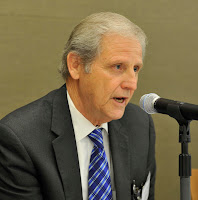 In summary, at the we learned that the more educated the community, the more appealing the community. Education is the only way we can be successful.
Posted by Unknown at 9:00 AM No comments:

Why We and Warren Buffet Love Small Town Newspapers

It's Wednesday, Nugget day, the day that The Dahlonega Nugget hits the stands and our mailbox.
We love The Nugget and read it cover-to-cover to catch up on police reports, read Wayne Knuckles' editorials, see what questions Dr. John (the County Commission Chairman) is answering in his column, and check to see if any Lamar Photography photos are published.

The Nugget is our home town newspaper - a photo-rich, information packed paper that keeps us informed on upcoming social events, festivals, sport scores, and so much more. The Nugget is more than just pictures and words on a page. It's a printed forum for local Lumpkin residents, politicians, school leaders and community organizers.

One of our do-not-miss sections is the Letters to Editor page and/or pages. Thee written commentaries and personal missives record the pulse of the county. (And yes, D&B has had at least one "Got to get this off my chest" letter published.)

Perhaps one of the main reason for my Nugget Love is that a small town newspaper is where I got my first job and where I became a news junkie.

Based on investment reports, looks like I am not the only one who loves the hometown newspaper.  Seems that savvy investment guru Warren Buffet  has invested lots of millions in small town newspapers. Why, you ask? Because, according to The Street, "Local small town papers.... focus on providing the news that everyone wants like sports and other local affairs." And that's just the role that Dahlonega's Nugget does.

Posted by Unknown at 3:51 PM No comments:

Next time you are in line at Walmart*, look at the person in front of you and then at the person behind you. Based on statistics in Lumpkin County, it's possible that neither of those people can read.

That's what a member of the Lumpkin Literacy Coalition said to me at a meeting once. Unfortunately, she's right. According to U.S. Census reports and other literacy studies, one third of the adults in Lumpkin County are not able to read. (Latest estimates are the number of non-readers and low readers is around 3,300.)

Now imagine your child asks you to read a story. Or the teacher sends you a form to fill out. Or you have a job application to complete. Or a test to take to get a job. Not being able to read is a handicap to the non-reader, and, regretfully, a handicap also to our county. Companies want an educated, skilled workforce.

The county's non-literacy rate and its impact on the local economy are the main topics of  the Adult Learning (ALL) Summit taking place in Dahlonega Wednesday, Oct. 10, at North Georgia College and State University (NGCSU).

Senator Steve Gooch, who heads the county's Business Development Authority is presenting the Summit which will feature Sandra Deal, Georgia's First Lady and a former teacher, as keynote speaker.

The hope of the half day meeting is that the attendees - important business, civic and government leaders - will realize how critical the literacy issue is and vow to do more to support the efforts of the Lumpkin Literacy Coalition and local GED program. (By more, we mean MORE than just buying a ticket to a Literacy Coalition event or writing a check.)

*Note to readers: Walmart is the only major grocery store/shopping center in Lumpkin and is an oft-frequented store by Dahlonega and Beyond. In fact, D&B were there today.
Posted by Unknown at 8:30 AM 3 comments: