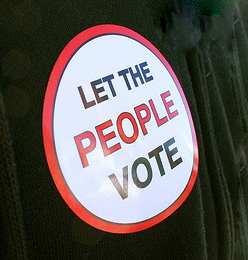 The Lumpkin County Board of Commissioners has a giant decision to make Tuesday night, July 17. Should they, or should they not, let the Lumpkin voters vote on Sunday liquor sales?

In two other 'Should the Voters Vote' decisions, three of the four county commissioners said NO. Only Commissioner Bill Scott voted to let citizens decide on the sale of beer and wine on Sunday.

The hope of an ever growing group of Lumpkinites is that at least one of the Negative Three will switch his No vote to Yes. If that happens, the tie breaker goes to Commission Chairman John Raburn, who has publicly stated that he supports the referendum.

The pressure is on the commission. Last month, the Dahlonega City Council voted to put the liquor referendum on the ballot for voters WITHIN the city of Dahlonega. If the city's referendum passes, then county businesses. This fact was acknowledged by all four commissioners in last week's issue of The Dahlonega Nugget.

D&B are not the only ones who feel that our right to vote is being held hostage by three men. The Nugget's editor Wayne Knuckles, in a strongly worded editorial in the same issue of the Nugget, urged the commissioners to "let the people have the final say." After all, he wrote, "The proper course of action, the fair thing to do, is to put the question before the voters."

D&B will be part of the crowd Tuesday night to see just what the commission decides.

It's time, commissioners, to let the people vote.