Why We're on the Guy LaBoa Team 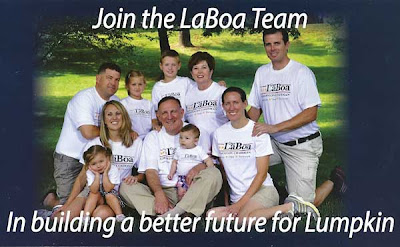 D&B have joined the Guy LaBoa team for Lumpkin County Commission Chairman. In fact, we've already cast our votes for him as early voters.

According to experts, the race between Guy and his opponent Chris Dockery is going to be tight. Both men definitely have their merits, but for us, Guy just is the better choice.

Guy graduated from the same university that D&B did (although a few years apart) so we know the values, ethics and code of honor that was instilled in him as part of his education. That alone would sway our votes his way, but there are other reasons to vote for Guy LaBoa. Here are a few:

But probably the best reason to vote for Guy is that he can be a full time commission chairman. With the challenges that our county is facing (and will face), we need a chairman who isn't juggling his chairman duties with another job or jobs. Guy is retired and has the time to devote to the chairmanship. Dockery has a full-time job as a builder and serves in the Army Reserve. Now I ask you, with those major responsibilities, just how much time will he have to handle the Lumpkin's critical issues?