Age - An Issue of Mind Over Matter and other Twainisms 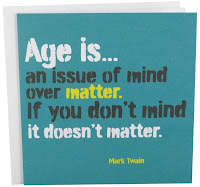 Age is an issue of mind over matter. If you don't mind, it doesn't matter. How often have you seen this witticism on a poster or refrigerator magnet? But did you know that the author of these 'oh so true' words was the legendary Mark Twain?

Twain - a newspaper reporter, riverboat pilot, printer, and author - had a great deal to say. Here are just a few Twainisms:
Want more Twain? Mark Twain (aka Kurt Sutton) is performing tomorrow (Nov. 11) at the Holley Theater, 7 p.m., in downtown Dahlonega.
Posted by Unknown at 9:00 AM