Yes, Virginia, There Still Is a Thanksgiving 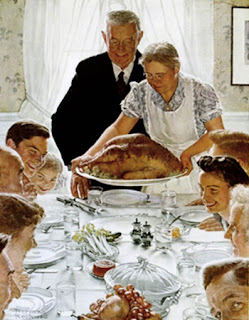 The one holiday that Americans - no matter what their religion - can celebrate together is Thanksgiving, the day our nation and our people 'offically' give thanks for our blessings.

Unfortunately, Thanksgiving Day is now the forgotten holiday. The one that we seem to squeeze in between Halloween and Christmas.

That's not the case in 2011. Christmas decorations have been up in the local big box stores since early October - often displayed right next to the Halloween masks and candy. The day AFTER Halloween Christmas music was playing in the local Walmart. And Santa is already here. Unbelievably, he arrived at one area store on November 6. What's next? Santa sharing the stage with the Great Pumpkin?