Fiddleheads Coming to a Town Near You 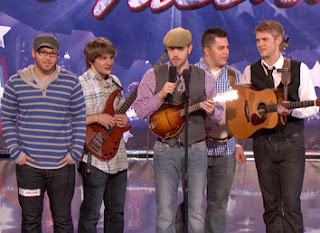 America's Got Talent's popular bluegrass band, The Fiddleheads from Dahlonega, could be coming to a town near you as they embark on their first major tour. The band, made up of North Georgia State College and University students and grads, will make their first post-AGT appearance September 4 at the Kentucky Bluegrass Music Festival.

Despite wowing AGY audiences and judges Sharon Osborne and Howie Mandel, the Fiddleheads failed to make the AGT finals. After their elimination, the band's fans (aka Fiddlenation) clamored for more Fiddlehead music. Hence the tour and a new cd/dvd coming out soon.

"So get ready," said the band's bassist Trygve Myers this week in the Dahlonega Nugget. "We want to repay the fans with what they voted for - our music."