The only good snake is a DEAD snake

Lamar strongly believes that the only good snake is a dead snake. It's a credo he's long lived with (growing up near a river in Louisiana sort of gives you a healthy fear of snakes.)

One of my fondest stories to tell is the one when our neighbor called the house asking for Lamar's help. She had found a snake curled up in her brass umbrella stand on her porch and she wanted him to get rid of it. Like most normal people, she thought that Lamar would hurry down to her home with a hoe or shovel or some other handy yard tool to rid her of the snake.

Well, Lamar hurried down there, but he didn't exactly have a hoe in hand. Instead, he had his trusty 22. While my neighbor gasped in surprise, Lamar proceeded to kill the snake....and leave several bullet holes in the umbrella stand. Needless to say, Lamar was never invited to 'remove' snakes from any other home in our neighborhood.

That story told, you can imagine my surprise when today, he showed me a snake that he had found in the yard...the second snake in fact. This one, quite small, was a victim of the shovel (as was the one he found last week.) 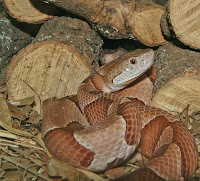 While I am making light of snakes, a copperhead did bite my neighbor's dog last month. Fortunately, the neighbor was able to get her dog to the vet in time to save him. Our property has a small stream running along the back, so we know that snakes do live literally 'in our backyard.' Guess I will have to alert the neighbors about how Lamar kills snakes!
Posted by Unknown at 5:11 PM