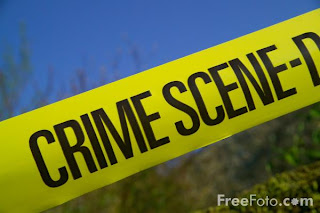 Any day that you pick up the Atlanta Journal Constitution, you'll see the front page filled with crime reports, i.e. - Resident opens fire on two intruders, Cars broken into in Buckhead, Boyfriend killed by stiletto heel.

Now Dahlonega has its share of crime too. In fact, the second page of the local newspaper, The Dahlonega Nugget, each week features Crimebeat, a snapshot look of the week's crimes.

Here are some of the actual crimes reported in Crimebeat:

1.  A woman reported that someone had broken in to her home, stole some important papers and fed the dog. She thinks the culprit is her ex-husband.

2.  An allegedly intoxicated man wearing all black climbed onto the roof of Piazza's. He was arrested for public drunkenness.

3. A woman threw a party and a lot of people she didn't know showed up. Later, he found someone had stolen her laptop, cell phone and $100.

4.  A woman reported that someone stole the power meter from the side of her house.

And here's our vote for the biggest crime of the week - A deputy accidentally struck a mailbox with his patrol car.
As you can see, these are some pretty serious crimes. But when you compare these incidents with the seemingly unending crime in Atlanta, you can see why Dahlonega and Beyond is quite a safe place to be.
Posted by Unknown at 9:27 AM